Central Market Dreamscape was funded by the San Francisco Arts Commission and the Artery Project. Using the word “Strand” on the theater marquee as inspiration, I reclaimed the abandoned Theater on Market Street in San Francisco using a detailed charcoal drawing of tangled strands of hair, symbolizing a feminist intervention. The large-scale, hand-drawn hair icon covered the facade of the building, contrasting the rigid architecture with a feminine symbol. 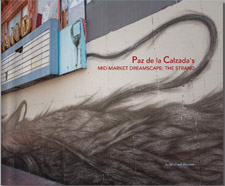 Paz de la Calzada was selected by the San Francisco Art Commission’s Art in Storefronts program to make a large scale artwork on the boarded-up Strand Theater on Market Street in the middle of San Francisco. The façade was covered with a charcoal drawing of tangled strands of hair, which appear to wrap around the building, with one bold strand of hair trailing from the historic marquee. Unlike traditional murals this wall drawing challenges the spatial boundaries of art, playfully engaging with the architectural space and creating a sense of wonder.
Preview