The beauty salon is more than a place to have a haircut, and this installation is a place that offers more than just a visual presentation. Beauty Salon with Estrellita Jones will also offer social interactions in a culturally defined and gendered space dedicated to personal expressions of beauty.

This art installation features its own cosmetics line, also named Estrellita Jones. The name encompasses a reference to the Spanish dancer La Estrellita, who performed in San Francisco clubs in the 1920′s. The full name Estrellita Jones is a combination of this early 20th century expatriate Spanish dancer, and the common American family name Jones. 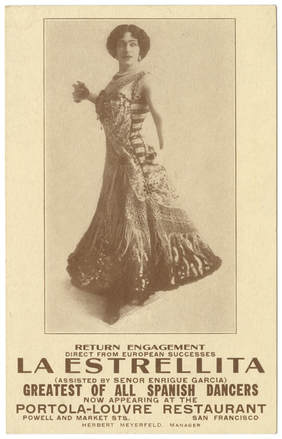 On May 14, 1917, La Estrellita (1879-1973) gave a performance at the Pantages Theatre in San Francisco. Born Stella Hurtig in Cincinnati, Ohio, Estrellita was one of the highest paid entertainers of her day. As a vaudeville performer, she introduced Spanish dance to audiences from North America to South Africa.  At the height of her career, she celebrated her birthday atop the Great Pyramid in Egypt, had a song composed for her, and was mentioned in Jack London’s story “The Kanaka Surf.”

​After retiring from the stage in 1920, she created the Paul Jones Perfume Company with her husband.  In 1939, the couple moved from Hollywood to a 25-room house in Piedmont, California, where they also installed their perfume factory.  Estrellita died in her Piedmont residence in 1973, at the age of 94.